I’ve had an (now) old Mac Mini 2,1 for about 10 years now and it has served me well. It used to be my desktop machine, then media center, then small home server.

At some point I realized I had moved all services except the printing service, so I thought it was about time I decommissioned it, but it deserved one last shot, so here we are 🙂

First, this specific Mac Mini model is a bit of a pain to get Linux on, because it doesn’t boot from a USB device, and it has a 32bit EFI (even though it has a 64bit processor). The first one can be overcome by installing rEFInd (which I had already done in the past), but the second one cannot, so you’ll need to find an image that has a 32bit EFI but a 64bit kernel, if you want to run a 64bit kernel, that is. This is not a problem for us, however, I’m just adding it here for the sake of completeness.

I recently ran into Arnold’s blog and Chromium OS builds for generic systems, which sounded great. My Mac Mini is not very powerful (it maxes out at 3GB of RAM) but still powerful enough to run Chrome, it could still have some life in it! Let’s get to work then.

We need one of the special builds, because it will have the Intel drivers we need, so go ahead and download the latest amd64 build from here. These builds have a 32bit EFI so we won’t need to do anything about it! After uncompressing the file write it to a USB drive with dd:

Make sure you replace /dev/sde with your device.

After this plug it into the Mac Mini, hold Atl / Option and power it on. You should be able to select the 32bit EFI boot from the rEFInd menu. With any luck, you should have booted into ChromiumOS: 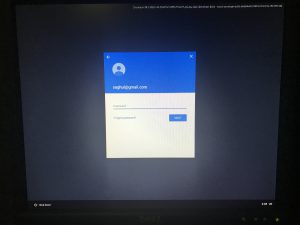 Poke around. Once you have decided you want to install it permanently do the following:

Press Control + Alt + F2 to get into a shell and login with the chronos user and no password. You can now make the installation permananent by running the following command:

The process will take some time, but after it finishes you should be running ChromiumOS, have fun! 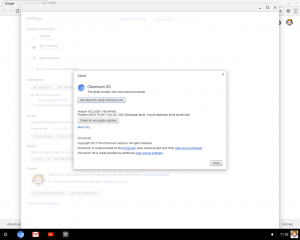